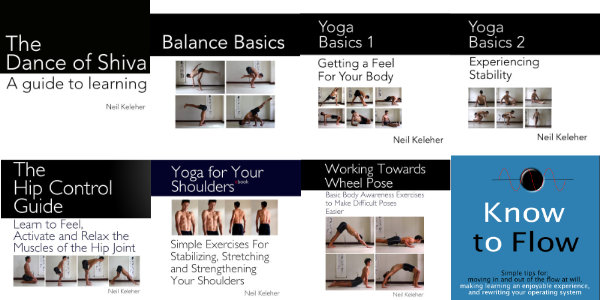 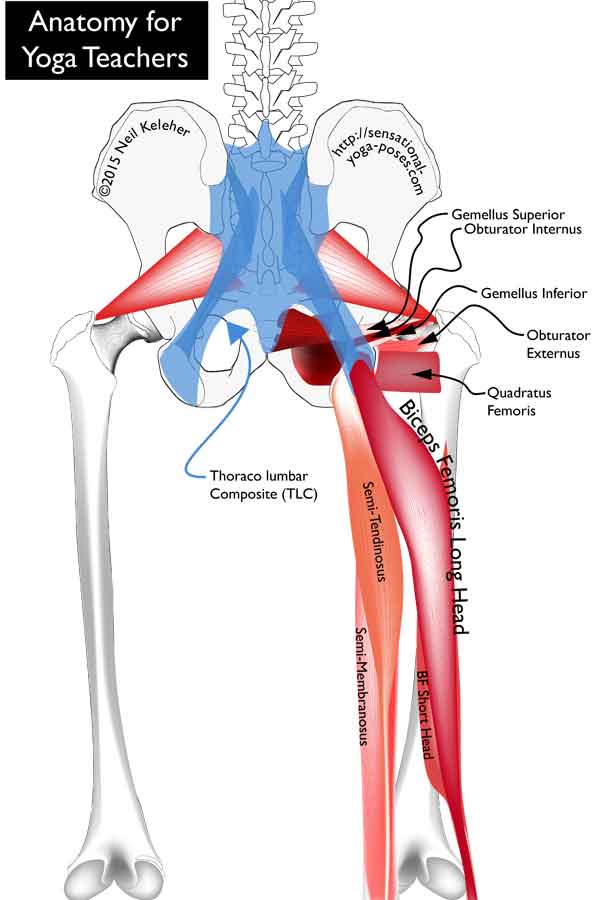 Quadratus femoris could potentially work in concert with the tensor fascia latae and thus not only help stabilize the hip joint, but also have an affect on the knee and ankle.

One of the deep six hip muscles

From there the fibers of this roughly rectangular shaped muscle attach to the back of the femur, along the inter trochantic crest.

The inter trochantic crest is a slight ridge along the back of the top of the femur that angles downwards and inwards from the greater trochanter to the lesser trochanter.

It's attachment points are relatively close to those of the gemelli muscles as well as the fibers of the obturator internus, where that muscle folds around the back edge of the pelvis prior to attaching to the femur.

The obturator internus and gemelli help to lift the hip bone

In anatomy of movement, the author points out how the gemelli and obturator internus (as well as the obturator externus) have fibers that run slightly upwards from the hip bone to the thigh bone so that these muscles, assuming the body is upright, can actually resist the pull of gravity on the pelvis and create some lift between hip bone and femur at the hip joint.

In this article the assumption is that the quadratus femoris fibers have fibers that run slightly downwards from the hip bone thus creating the opposite effect.

If you look at various anatomy texts, very few seem to show the position of the obturator internus and gemelli in a way that corresponds to what is said in "anatomy of movement."

The idea in stating this is that anatomy texts may not always be accurate with regards to showing muscle fiber angle.

It's a single joint hip muscle

Like the gemelli and obturator internus, but unlike the gluteus maximus, the quadratus femoris only crosses and acts on one joint, the hip joint. It has a similiar fiber direction to the deep portion of the gluteus maximus. However, the fibers of that muscle may also attach to the sacrum making it a polyarticulate muscle.

The quadratus femoris could be thought of as connecting to the bottom corner of the hip bone. Working from a fixed femur, it can create a downwards pull on the sitting bone.

Single and multi joint muscles that oppose it

Note that if you view the hip bone from the side, diagonally opposite from the sitting bone is the ASIC or anterior superior iliac crest. It's the point of the hip bone. The gluteus minimus attaches here as well as the tensor fascia latae, sartorius.

Of these, only the gluteus minimus is mono-articulate.

Tensor fascia latae and sartorius are poly-articular and both attach to the top of the tibia.

Creating forces that cause hip extension and external rotation

Activating quadratus femoris while keeping the pelvis and thigh bone still and , it could act against the gluteus minimus to help stabilize the hip joint. Or it could work against the tensor fascia latae and thus help to stabilize or control the hip joint, knee and even foot and ankle since the tensor fascia latae attaches to the tibia via the IT band.

8 book Ebook bundle, $48.00.
Dance of shiva for coordination and mental flexibility, balance basics for understanding balance, yoga basics 1 and 2 for getting a feel for your body, hip control guide and yoga for your shoulders for learning your hips and shoulders, wheel pose for tips on learning difficult poses and know to flow to learn how you can use flow and it's opposite state for enjoyable learning. 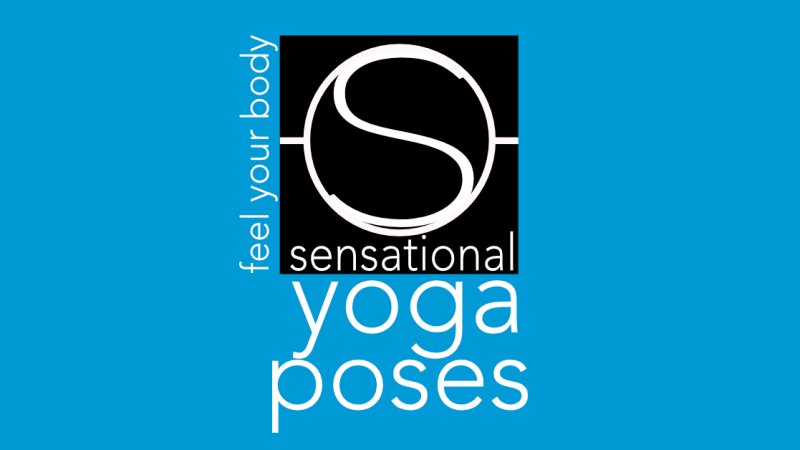