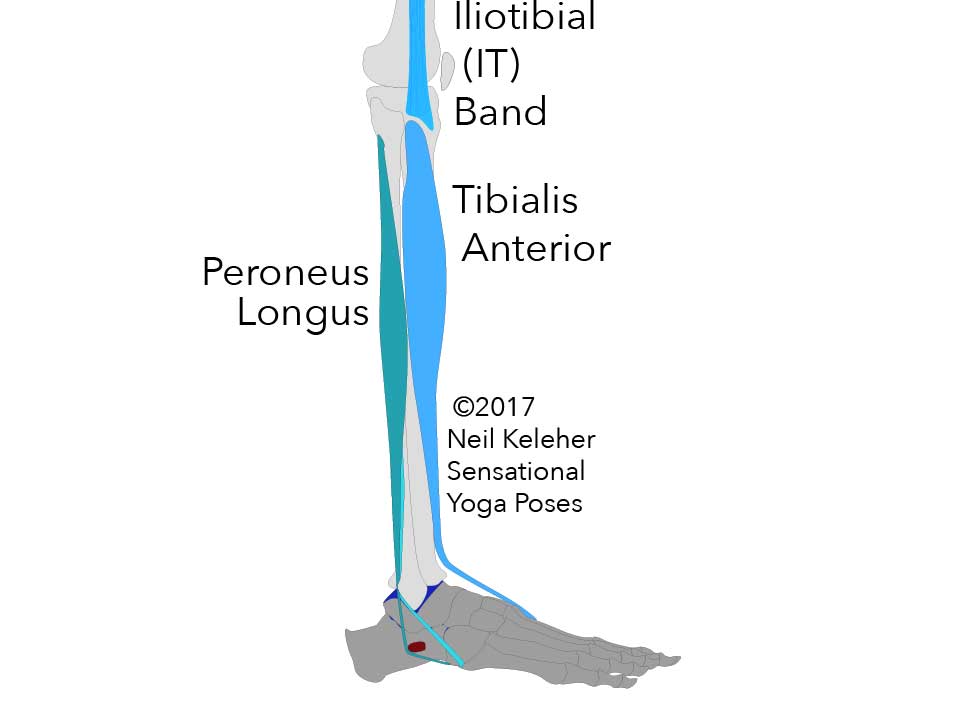 When studying the foot it can help to define the foot as including the bones of the feet, ankles and lower legs. So essentially, the foot ends at the knee.

One reason this distinction, this definition of the foot, can be important is that the knee allows rotation of the lower leg bones relative to the femur. If you control this rotation, or stabilize it, you can help to anchor the muscles that attach between the lower legs and feet.

Working in opposite direction, if you stabilize the feet and ankles, you help to anchor the muscles that rotate the knee. They can then be used to control the femur and innominate bone.

I actually figured the above exercise out as a way of fixing my fallen arches. I'd been diagnosed as having flat feet when I lived in Canada. As a result the Canadian army wouldn't accept me. So I moved to England to join the British army instead. So that I could pass the medical I figured out how to hide my flat feet or unflatten them. I basically fixed my fallen arches.

The primary action of rolling the shins out while standing is caused by Tibialis Posterior.

Note that rolling the shins externally can also be caused by the muscles that act on the IT Band.

However, if the focus is on "using the feet" to roll the shins out, then this action can be driven by activation of the Tibialis Posterior.

You may feel tension in the back of your lower leg while rolling your shins out. That could be your tibialis posterior activating.

Tibialis Posterior attaches to the back surfaces of both the fibula and tibia. Its tendon passes down the inside of the ankle to attach to the underside of the inner arch of the foot. 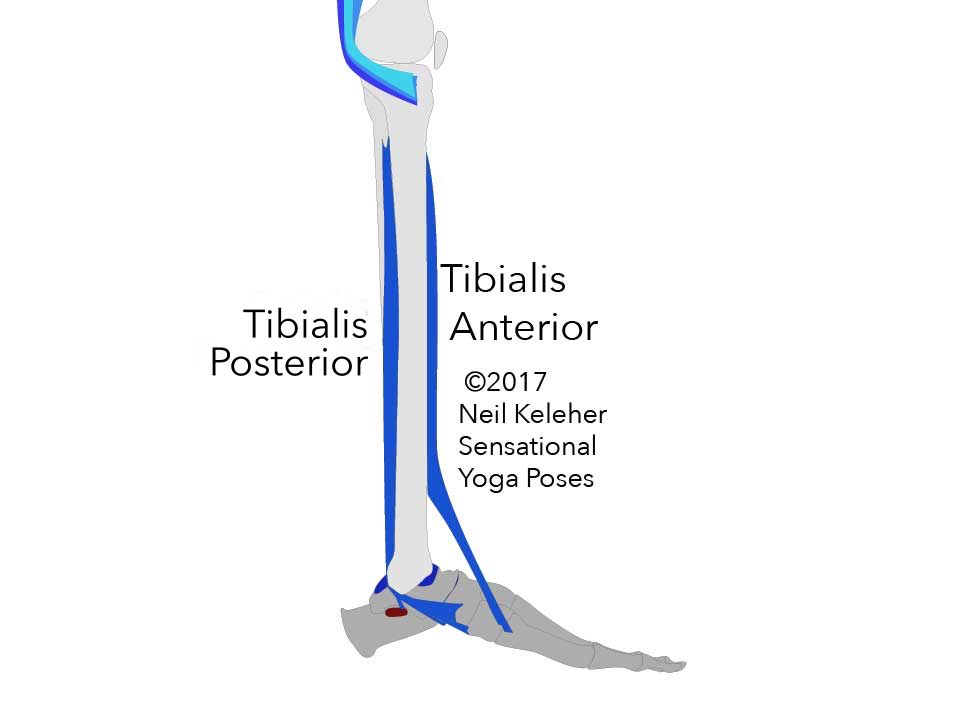 Peroneus longus attaches to the outside of the fibula (the outermost and smallest of the two lower leg bones.)

Activating together, these two muscles can work against each other to stabilize the shin against rotation while standing.

This can be important for muscles that act on the IT Band as well as the Sartorius, Gracilis and Semitendinosus muscles since these muscles can act from the pelvis to rotate the shin outwards or inwards. With the shin stabilized against rotation by the Tibialis Posterior and Peroneus Longus, these muscles have a stable foundation from which to help control the pelvis.

Peroneus Brevis, like Peroneus Longus, attaches outside of the fibula. 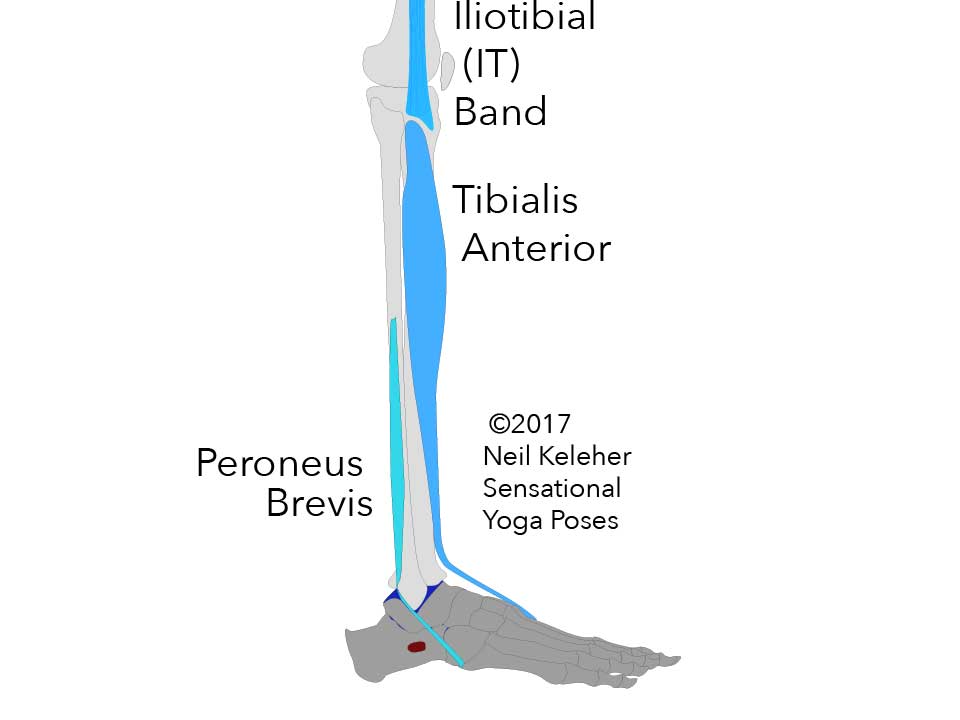 It attaches to the lower part of the fibula underneath the peroneus longus.

Activation of the peroneus longus can create a forwards push along the outside of the calcaneus. Meanwhile the peroneus brevis creates a rearwards pull on the outer-most metatarsal.

These opposing actions can work together to help lift the center of the outer arch of the foot.

Tibialis Anterior is situated at the front of the shin. 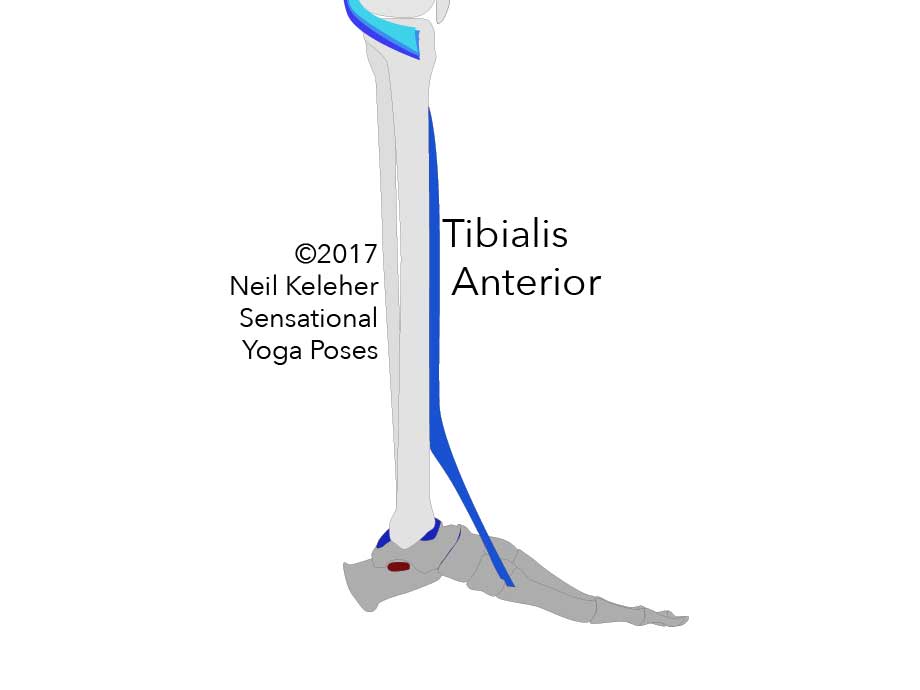 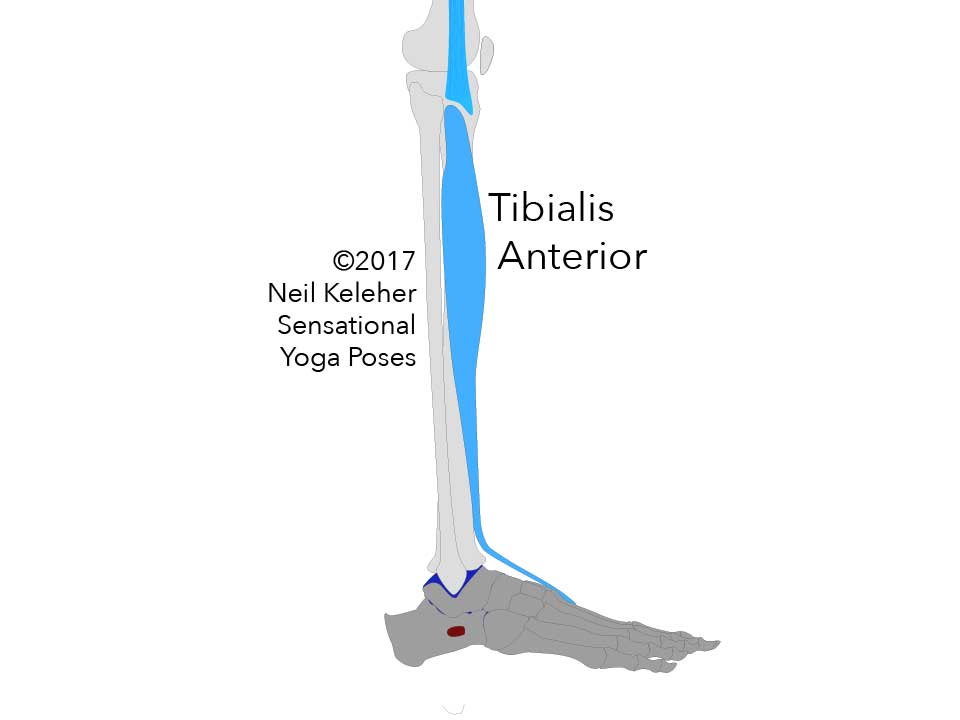 Tibialis Anterior as a Fascial Anchor for the IT Band

From Thomas Meyers Anatomy Trains we know that the Tibialis anterior has a connective tissue connection to the front fibers of the IT band.

(The rear edge of the IT band has connective tissue connections to the Peroneus Longus).

For myself, on one occasion where I had knee pain pretty much at the spot where the IT band connects to the Tibia, Tibialis Anterior activation helped to alleviate that knee pain.

This sort of muscle activation, activating muscles in the same "anatomy train" is another way of creating stability. Possible names for this mechanism are "Fascial Stability" or "Fascial Anchoring" or to be clearer, "Muscle Activated Connective Tissue Anchoring."

It's basically a means of taking up slack.

It creates stability for a muscle by adding tension to the connective tissue structure that it is a part of.

Stabilizing the Foot, heel and Shin

The actions of all of these muscles, acting in concert, can not only help shape and stabilize the arches of the foot, they also help to stabilize the shins against rotation giving muscles like the tensor fascia latae, gluteus maximus, sartorius, gracilis and semitendinosus a stable foundation from which to control or help stabilize the pelvis.

For more on using these muscles to stabilize the feet and lower leg bones, read shin rotation and heel stability